We’d like to speak to the manager. Woolies has done it again, undercutting the little guy. At this point, it’s actually rather unbelievable. Not only did they manage to shamelessly steal the design and coloring of Shannon McLoughlin’s ‘Ubuntu Baba’ baby carrier, but they also went so far as to steal this small, independent business’s customers by purposefully using marketing strategies against them.
But let’s back up a bit. In case you’ve haven’t been following Woolworths’ impressive track history of stealing from the little guys, we’ll fill you in. In the past  6 years, retail Woolworths has been accused of stealing creative work 3 times.
So when this news broke recently via a personal blog post written by Shannon and posted on the ‘Ubuntu Baba’ website, it was shocking but unfortunately not surprising. It seems their sense of integrity has actually lessened with each of these cases.
Business owner and mother, Shannon McLoughlin also claims that Woolies also bought Google AdWords keywords related to the names of her various designs such as “Phase 1” and “Phase 2”.
What does this mean? Essentially, you hear about Ubuntu Baba, or see someone with one of the carriers and find out the name of them, you then go and google “Phase 1 baby carrier” and what pops up first? The Woolworths product. Effectively the retailer is stealing potential clients from the small business. In a digital world, this is possibly worse than stealing the actual design. Ubuntu Baba, being an online store rather than a physical one, relies on online customers. Most online shoppers google products before actually purchasing. Visibility is key here – customers want to see the product. And the chances are if the Woolworths baby carrier is at the top of the search result list, they’re likely to get that sale over a small local business like Ubuntu Baba. 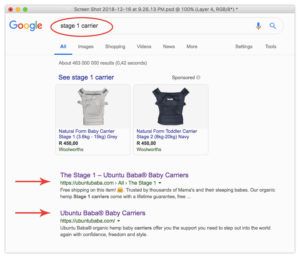 The blog post was titled ‘Dear Woolworths, you have some explaining to do’, but honestly we aren’t sure they’ll be able to explain their way out of this one, or if they even care to. The issue here is not a legal one but a moral one. While legally it appears Woolworths has grounds to blatantly steal and undercut small local businesses, they should be held accountable for it socially. They have since apologized and pulled the product from their shelves but it doesn’t look like the matter will be taken any further.
Not very ‘ubuntu’ of you, Woolworths.